Edit: Changed the background to lighter one and added some glow on the headlines.

Blog: 5 Years!
Tags: theme, books, anniversary, web, robinhobb - Comment!
Yes, exactly 5 years since the first post on the "new" skallen.net (v2.0). Still cruising around on 800 000+ Visitors, not quite a million yet. I hope I'll reach 1 million for the 10 year anniversary

I was delaying this post quite a bit just to get exactly 5 years, so a lot of stuff has piled up, mostly books. I've recently bought "The Farseer Trilogy" by Robin Hobb. I acctually had my eyes on it for a long time (who can resist titles like "Assassin's Apprentice"?), and finally got around to buying them. Was kinda put off in the beginning, mostly because it was a first-person narrative book, not a type I'm used to in fantasy. But it was kind of interesting to see the story from only one persons prespective (though the books cheat a little, the protagonist "dreamwalks" in his sleep and sees various events happen around the world that he would normally be unaware of).

Anyway, good books, gonna have to buy the rest of Hobb's books now!

Soon vacation time, golfing is going crap at the moment, but hopefully it will change!

'Till next time....
Blog: Here be dragons
Tags: theme, dragonage, gaming, xmas - Comment!
Not much new to tell about, all my free time has mostly been consumed by Dragon Age: Origins, talking to a demon pretending to be Morrigans headless mother: 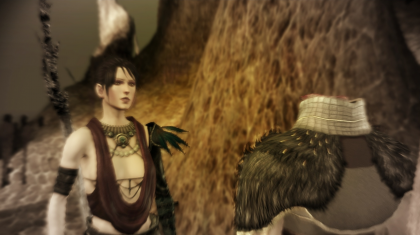 After a finishing fighting her and cutting her head of I talked to Morrigan (to the left) a bit to fast, and the whole dialog before the fight repeated, but her mother (to the right) was now missing the head

Tomorrow its x-mas theme time, december. So I got work to do tonight, need to update that theme to more look like the current ones.
Blog: Halloween!
Tags: theme, web, projects, hardware - Comment!
Booo! It's halloween, and what better way to celebrate it then with a new theme? As usual change to it at the theme selector at the top of the page.

What else.... I fixed my mouse last week, left button was glitching making me double-click when I was just holding it down. So I opened it up, put some epoxy on the thing pressing the microswitch (which was kinda worn-down) and filed it down to the right height. Worked really well. Also took some pictures of it, will put it up later under projects, after my rework of that section is done.

Rework, yeah, I'm moving to Montana... errr no, im moving away from tables to divs is what I meant to say. Already managed to cut down the number of DOM objects on the fronpage from ~900 to 800, and I'm not even half done. So in addition to it being proper (you're not suppose to design with tables) it will also load faster. Sounds like win-win to me!

Thats it for now, enjoy halloween!
Blog: New Theme... And poll!
Tags: theme, poll - Comment!
First new theme in a really long time! This time a red one. I actually planned to make a red one for the launch, but it turned out pink instead of red, so it got scrapped. But now I was stuck without internet for a few days and that helped

. The switch for changing themes also got a few tweaks, now it doesn't require the browser to reload the page every time you switch theme!

Also a new poll, this time about your favorite theme (coincidence, I promise!). Since I can only have five options the x-mas theme had to stay out of it. You can't pick it though, so I guess it makes some kind of sense.

Also working on another theme, we'll see if it gets finished this year or next

Cya...
Blog: Christmas is comming...
Tags: xmas, theme, skinning, gallery - Comment!
With new theme! The x-mas theme will automatically be activated in december and will override the user selected theme. That theme will return in January.

Merry Christmas and a Happy New Year!
Blog: New theme!
Tags: SAIK, skinning, theme - Comment!
Okay, first, no new game... (big surprise!). But I've done something new at least! If you check the theme selector (top right) there's a new black button there, that will switch to a special AIK theme (by AIK I of course mean SkellefteÃ¥ AIK). Also fixed a small bug, when clicking the theme selection buttons it would always jump back to the main page, now it stays right on the page you where viewing.