. So I'll just have to postpone it again.

But at least I have something new! Instead of just text links to wikipedia for all "watched", I now have a small image (similar to the sidebar) and a rating for each entry. They are also linked to the actual opinion on the opinion page. Not everything is updated yet though. Unrated stuff will still just show a name and the old wiki link. Easier to see and adds a little more color to the front page, especially to those posts with no images, like this one ;)

I'm going to tweak the front page a bit more, then the next part to get an overhaul is the long forgotten 'projects'.
Blog: More and better!
Tags: ç‰§é‡Žç”±ä¾, yuimakino, web, php, javascript, opinion - Comment!
I've just updated the opinion system a lot! First of all: The poll is removed from the frontpage and replaced with a new box called 'Latest Opinions'. It displays the five most recent opinions added, and a link to each one.

That's right, I know have a way to show each individual opinion, without the use of javascript. As just shown in the new box, also makes it possible to link to a specific one. I've also added a way to browse the opinions without using javascript. Maybe not as nice looking as the javascript way but it works. Possibly also lets search engines index the content (not sure how good they are at javascript).

Last and not least, I've also added support for longer comments in each opinion, as demonstrated by my opinion on Yui Makinos latest album, Holography.
Blog: Who witches the witchers?
Tags: opinion, php, javascript, web, gaming - Comment!
I've been working hard on my opinions since last time. I now have a total of 535 items in six categories, as well as a nicer overview page with some graphs and stats. The 'games' category is finished, all the games have an image, a rating as well as a short comment. 'Anime' and 'TV' have images and ratings on all items, but still missing a lot of comments. 'Books' and 'movies' are still missing a lot of images, but they have ratings.

I'll keep working on updating them, as well as adding new features such as fallback browsing without javascript, linking to a single opinion and the ability to post longer 'reviews' instead of a short comment (the limit is 4 lines of text at the moment).

Also been playing a new game, 'The Witcher 2'. So far I'm enjoying myself quite a bit. It's a bit more hack n' slash compared to dragon age, but the story seems nice. It's not a forgiving game though, I've probably died close to 50 times already and I'm only playing normal! Here's a screen from a boss in chapter one: 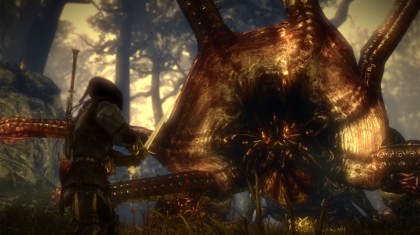 Blog: That's just, like, your opinion, man...
Tags: javascript, web, php, opinion - Comment!
I mentioned in the last post that I was looking for a place to catalog the books I read, kind of like what I have for anime over at anidb. I wasn't happy with the alternatives I found, so I made my own place to rate and comment on stuff I watch/read/play etc.. So here it is:

Here's a preview if you don't want to head over there just yet:

The listing of opinions is done with a combination of php (for getting the data) and javascript (for display). This means that the user can sort and browse without having to reload the page. Pretty neat

It's still a work in progress. I have some new features to add as well as more content, stay tuned

Blog: Ulduar, or how time disappears
Tags: images, php, worldofwarcraft - Comment!
New expansion of World of Warcraft this month, and I've spent the last 5 days in a row raiding. That leaves little time for anything else. Before it launched, I did have some time to work on the tag system I mentioned in a post a while back. Now I have tags for music, wiki, links and images, so I can post more fun stuff a little bit easier.

Anyway, its springtime again, and I've taken out my bicycle! But its thought cycling to work after a winter of riding the bus

Thats all for now, next time I'm gonna post some Tilt-shifted images

Blog: Small things can be good too...
Tags: yuimakino, music, php, web, ç‰§é‡Žç”±ä¾ - Comment!
I've done some small updates I've been thinking about doing for a long time. The comments are back! Yay, now I can talk with myself both in the shoutbox and in the comments!

Also removed the big box on the frontpage. It was simply too much space for a few headlines. Now you will get right on the latest blog post (hello!). I've also reworked the sidebar a bit, now a small box with recent posts are there (as a replacement for the missing headlines box above the blog), and it moves! If you haven't had time to vote in the poll (you really should) the poll goes on top, but if you already voted, the headlines goes first instead. Also changed a few things in the coding, but mostly non-visible stuff.

Now, for the second time in history, a post with an image!

The picture quality is not the greatest, taken with my old S700i.

Ah, and as the observant people already noticed, I've removed the little sidebar displaying the music. It will be back (sometime) with a text-based equivalent later.
It's back

Also just noticed, this is my 100th post at the new skallen.net, woohoo, grats me!